I (Andrey Filippov) quit my job and started Elphel, Inc. in 2001 (Magna, UT USA), all the projects were covered in LinuxDevices (complete list on the articles is available here). For several years Elphel was a one-man company, in January 2004 I wrote an article Taming of the Iron Penguin (Russian) in the largest Russain computer-related magazine Computerra and announced there a competition among the software developers for the best video steramer to run in the camera. That was a good idea and after the competition itself was over most of the developers remained in the Elphel team. At first - as volunteers, later - as full/part time employees.

Not all of these developers live in Russia - two, including the winner of the competition are from Kiev, Ukraine. But still all of them know Russian much better than English and so most of our technical discussions were on our private Russian-language forum. So far I failed to move these discussions to the broader audience but believe that Wiki technology can help. Here we will mantain most of the site in English but still have some pages/discussions in Russian, translating documents as we go. Or when somebody else needs it and is not satisfied with Babelfish automatic translation. We will try to keep English pages current - anyway even in Elphel not everybody knows Russian.

Please excuse not-so-good English of our developers and feel free to fix the errors if you see them.

Software in the Elphel cameras started from Axis Developer Boards Software and was amended for the camera specific functions. It was modified to work with newer hardware (models 303-313/323-333), support more features and now it seems to be a good time to make a major redesign instead of applying incremental changes.

Web-based user interface can be especially useful for the open hardware as it reduces the entrance threshold for the developer who would like to customize the cameras functionality - regular web development tools are sufficient for the job.

This (AxisAPI) makes Elphel cameras work with some third-party software

We have MPlayer patched for use with our cameras. Patches for source codes are accessible on Source Forge but compiled package is only for Debian on i386 architecture. We plan to make a compiled packages for PowerPC architecture and also for Slackware.

Multiple camera view HTML page is based on GenReS plugin for Mozilla/FireFox. Now works: scrolling by picture dragging (digital PTZ), camera selection, zoom switch, automatic detection of stream stop by timeout. List of cameras adresses is now editable manually. It will be automaticaly generated in the Live CD. The page will runs recording software by user request. Video will be saved to a fixed directory and splitted to separate files by tunable number of frames. Main parameters of video captire wil be changeable from the page. The page later can be used in the #Video Server.

Elphel live Linux CD contain software for camera users. We also will make a live DVD for developers. The live CD based on Knoppix.

Currently we have CD only for i386 architecture.

We have plans to make Live CD for PowerPC too.

We should move to DVD distribution as most of the disks are anyway provided with the hardware, not downloaded.

The idea of keeping as full Knopix as possible was to introduce GNU/Linux to the camera users who never had this experience before. But these users will get DVD in a box, downloadable CD version can have more standard packages removed and replaced with camera-specific software.

One of such major additions will be preinstalled camera development environment (possibly based on Eclipse) to simplify modification of the camera code. Again - don't forget that many of those future developers use now only Visual Studio (or how exactly it is called?) and GNU/Linux can be somewhat alien to them. With this environment they might start playing with their code without prior knowledge of GNU/Linux software development process.

It can be useful for the hardware/fpga developers too - to be able to write some code to support the hardware features without spending much time on the mastering software development process.

PC-based video server that will archive incoming Ogg Theora incoming streams from several cameras and transcode them on the fly to lower resolution (binary decimation, windowing) and frame rate (i.e. using only key frames) presenting multiple streams (real time and recorded) to the operator. The external interface of the server might be one of the industry standard and compatible with 3-rd party legacy software.

Synchronization of the Cameras

Sometimes you need to acquire images triggered by an extarnal event ar several cameras need to be syncronized with each other. Camera Synchronization is all about it.

We plan to make model 333 camera work with Zoneminder

I'll try to retrieve what was written before on the motorized lens control. In short - C/CS mount is rather old and does not work well for interchangeable motorized lenses. We are trying to build an adapter from C/CS-mount to a bayonet type connector. And place a tiny 5mm wide PCB ring in that adapter. This 10331 PCB has a reprogrammable microcontroller and uses just 2 connections to the camera for power and data signals combined. It provides all the necessary connections for the most types of motorized lenses.

Step one Test setup. Assemble all components in a setup that can record video

Objective: Does it work, at all? Secundary: Battery life? Video quality?

We are switching to extruded aluminum tube (actually original 303/313 also was design for a standard aluminum profile). Model 333 RJ-45 connector is designed to fit into RJField shell [1]. 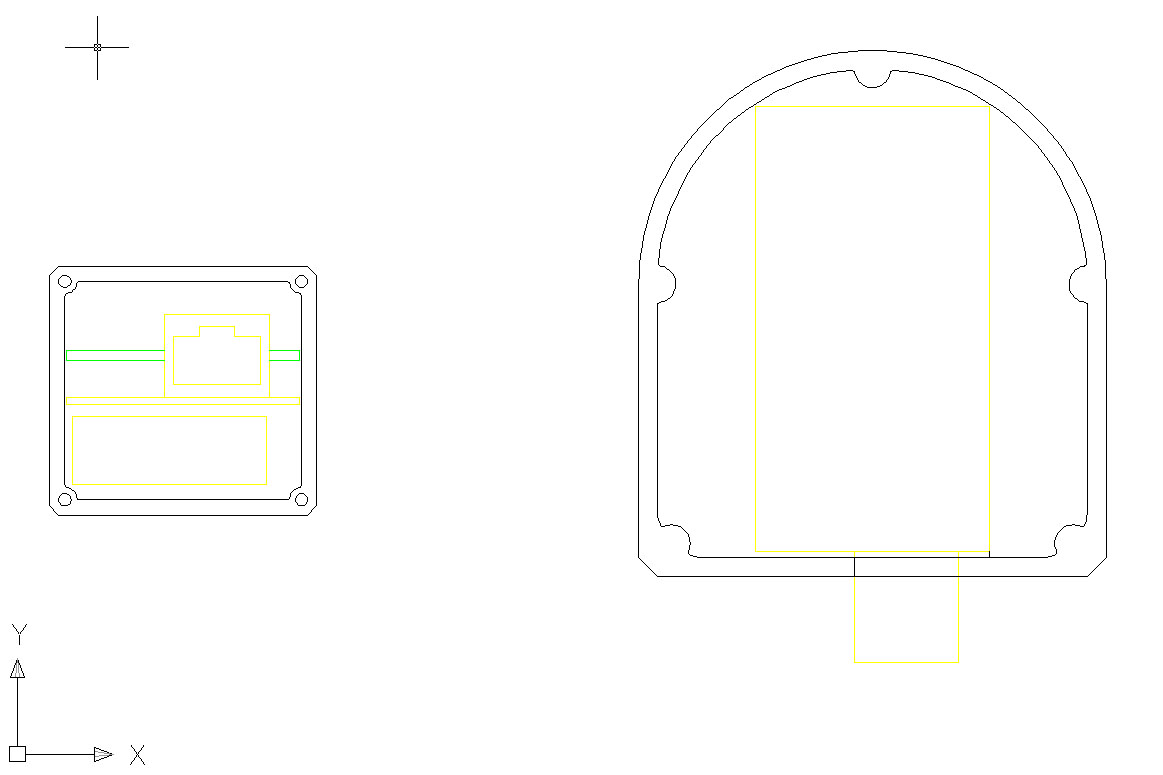