It is useful to establish a correct exposure when unlimited light is available. In digital cameras with viewfinders (i.e. those that replaced film cameras), this exposure is sometimes referred to as the base ISO setting. Since Kodak only publishes the CCD's sensitivity in terms of QE, the following is an empirical method of arriving at the base ISO.

According to Kodak's specification for the KAI-11000, the vertical transfer collumn, or VCCD, has a charge capacity of 90 ke. When Vsub is set to its minimum value of +8 volts, Kodak states that there is no blooming protection because the photodiode capacity is higher than this. Thus, the threshold of blooming indicates an exposure of 90 ke. Blooming is caused by charge spilling into adjoining pixels, and appears as elongated vertical smears starting in bright areas and spilling into dark areas. Here is an example of a GreytagMacbeth chart with bloom: 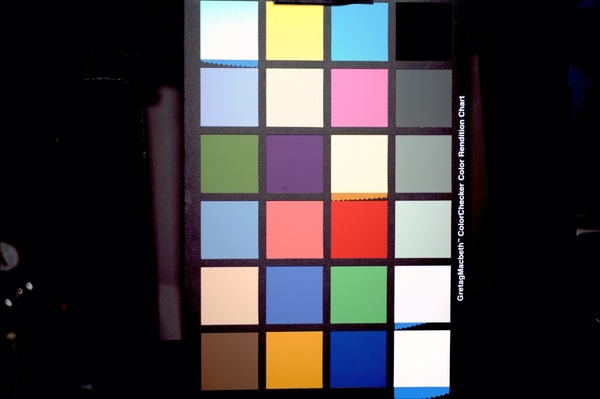 Notice the brighter squares have spurious extensions out of their squares, down into the black divider.

The presence of blooming is independent of the parameters on the main CCD acquisition parameters page because it occurs before charge-to-voltage conversion, and before any amplification. (Plus, the amplifier gains in the system are constant. The gain settings are only multiplicands.) Thus, it cannot be confused with other types of saturation.

So how is Vsub set? The number in the Vsub box has a relationship with Vsub as shown: 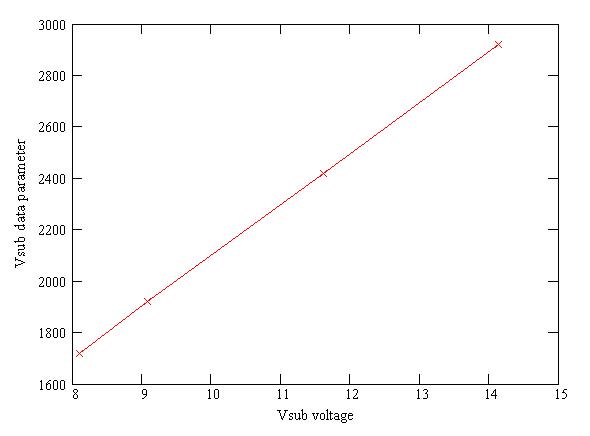 Kodak also states that they label their CCD containers with the Vsub that gives a photodiode capacity of 60 ke, with at least 100x antiblooming protection. This is only about half a stop down from the full well capacity, and 100x is about seven stops brighter than the scene highlights. Thus, as its special measurement and designation suggests, this is a good compromise between well capacity and blooming protection, and thus this is the exposure value to aim for, at least as a good starting point.

On my cameras, the label was apparently transfered to the inside of the camera housing. It is marked "VAB = 11.2 V". It seems likely that this is the Vsub value that they are talking about. 11.2 volts corresponds to 2307.

So here is the method: Set Vsub to 8 volts, adjust exposure in any of the ordinary ways, and find the threshold of blooming. Record that light reading with a separate meter. Then set Vsub to the suggested value, 11.2 in my case, and reduce exposure by about a half to two-thirds stops. Then set the gain and zero values so that the bright-limit highlights saturate at 255,255,255 or close to it, and the dark-limit shadows read 0,0,0. The gamma value also needs to be set so that intermediate values are rendered correctly; so far I've found 0.45 is optimum.

Finer color adjustments can be made with a custom color profile.

Using this method, I've arrived at ISO 40 as the base value. This seems reasonable compared to other large CCD's which are typically ISO 50 to 100. Being an interline transfer CCD, the KAI-11000 fill factor is significantly lower than full frame chips because half the chip is covered with the light-shielded VCCD.