SCINI is a submersible robot i'm helping develop that will probably use an Elphel video camera for control video and static imaging. See Research#SCINI:_Submersible_Capable_of_under_Ice_Navigation_and_Imaging and http://scini.mlml.calstate.edu for more information about the project. This space will track some of my experiences with the camera, questions i've got, etc. Feel free to copy anything from this page into other sections of the wiki if you find it useful and I haven't copied it over yet.

We want to run the camera off of 12v DC eventually, so we're trying to convert our POE 10353 revision C board to 12v. We were able to get a 12v to 3.3v DC/DC converter of the same footprint/model from P-Duke because nobody else sold the part in small quantities; they mailed us a few but it didn't sound like they did small orders regularly. The part number was FKC08-12S33.

Running the liveCD was a great way to see if everything was working, but the performance was unacceptable, so we installed ubuntu on a laptop and are using that. Both ubuntu and knoppix are debian based, and once I installed enough development packages on ubuntu I was able to install the elphel programs.

Performance of of the cgi camera control through firefox is still pretty slow, even when tested from a higher performance desktop: the bottle neck is probably the Elphel webserver sending full image photos in between accepting configuration commands. I'm thinking of writing a quick python/wxWidgets utility to change exposure and frame size settings faster; is anybody working on something similar? It could either drive ccam.cgi, the forthcoming PHP interface, or I could hack ccam.cgi to accept a non-HTTP TCP connection (much smaller packets hopefully. maybe use Twisted on the control side?), or reimplement ccam.cgi in python (probably a bad idea to keep an extra python namespace running on the camera).

On our ubuntu laptop I tried recompiling mplayer to accept huge RTP packets using the given patch from elphel@sourceforge as well as the ubuntu standard patch set, but it isn't all quite working yet. It took a long time to get all the required development tools installed on ubuntu (damn binary based distributions!) and I think I messed up the flag for sdp somewhere along the line. I was able to capture a few clips with mencoder.

Plain old VLC has been working great though, it can easily handle half resolution video at 12-15fps. With full resolution it throws some errors about long packets and the video comes out looking like this (note: it is video and the contents of the stripes change): 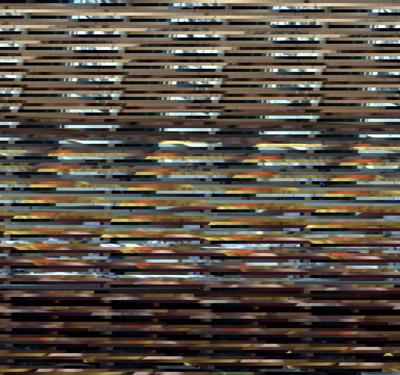 I don't know if that's because of:

We're looking for a small, wide angle lens that will mount onto the sensor board and still fit inside our forward looking dome. Water acts as a magnifier, so we need at least 90 degrees FOV.